Kids are more prone to falling sick than adults are. This is naturally because their immune systems are less exposed to germs, in comparison to adults. 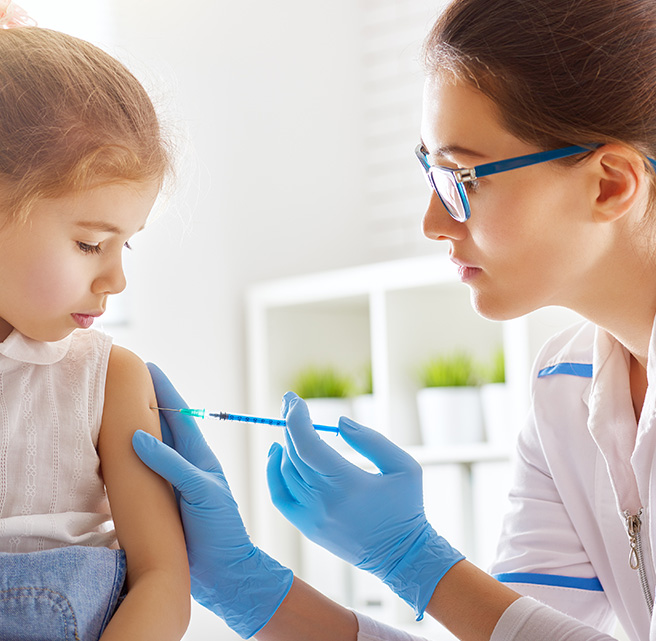 Some of the common childhood infections are:

Colds are caused by viruses in the upper respiratory tract. In the first three years of life alone, most children have eight to ten colds. And if there are older school-age children in your house, you may see even more, since colds easily pass from one child to another. Symptoms of a cold including runny nose, sneezing, lower fever, congestion, and cough may last for up to ten days. If your child has a typical cold without major problems, the symptoms should go away slowly after seven to ten days.

An ear infection is an inflammation of the middle ear, usually caused by bacteria, that occurs when fluid builds up behind the eardrum. Anyone can get an ear infection, but babies and children get them more often than adults. Five out of six children will have at least one ear infection by their toddler period. In fact, ear infections are the most common reason parents bring their child to a doctor. The scientific name for an ear infection is otitis media (OM).

Some of the many causes of ear infection and contributing risk factors include:

Unlike the seasonal flu, a respiratory infection caused by the influenza virus, “stomach flu” refers to several viruses that cause the intestines to become inflamed. A common cause of stomach flu is norovirus. If your baby or child has had several bouts of vomiting or diarrhoea, he or she will need to replace lost fluids and electrolytes. If you are breastfeeding, continue to give your baby breast milk. Breast milk has fluids and electrolytes needed to prevent dehydration. If you feed your baby formula, try switching to one that is lactose-free while your baby is sick. Lactose can make diarrhoea worse. Your doctor may also want you to give your baby an oral rehydration solution (ORS).

Symptoms include three or more watery loose stools (bowel motions) per day, the stools are often more smelly and pale than usual, mild tummy (abdominal) pain sometimes occurs but is unusual. Many toddlers develop eating and drinking habits that are not ideal and these may contribute to causing diarrhoea. The diarrhoea will often stop if the child: has a good amount of fat in the diet (whole milk, etc) and has meals that include a normal amount of fibre (but not a high-fibre diet).

A sore throat is pain, scratchiness or irritation in the throat that often worsens when you swallow. The most common cause of a sore throat (pharyngitis) is a viral infection, such as a cold or the flu. A sore throat caused by a virus resolves on its own.

Symptoms of a sore throat can vary depending on the cause. Signs and symptoms might include:

Take your child to a doctor if your child’s sore throat doesn’t go away with the first drink in the morning, recommends the American Academy of Pediatrics.

Get immediate care if your child has severe signs and symptoms such as:

The best way to prevent sore throats is to avoid the germs that cause them and practice good hygiene.